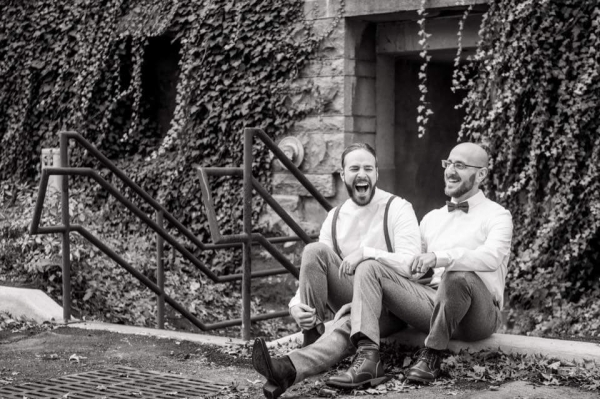 Everyone has a story, this is ours.

How did you meet? We met online but things advanced pretty quickly. We actually worked in the same plaza so we saw each other pretty much everyday once we connected and when you know, you know.

How long have you been together? We’ve been married for 3 years and together for 5.

Who proposed to who? (James) We actually both proposed to each other on different occasions. I proposed to Eric in Lake Placid in October. We rented this great place on Mirror Lake and had an amazing weekend, I was so nervous!
(Eric) I proposed the day after Christmas, I had this elaborate plan involving a gingerbread house with a trap door. I won’t say it went off without a hitch but he said yes so it all worked out.

What was your wedding like? It’s kind of funny because everyone that knows me (James) thought we would have some huge wedding, something very fancy. But we actually ended up eloping and getting married in Portland Maine. Portland is one of our favorite places and we head up there whenever we can. So it was City Hall to get married and then out on the town! We made a long weekend of it, just Eric and I.

So no big reception? We did end up doing a separate reception later on for everyone. We rented out Mean Max, catering from Raul’s, both in Glens Falls NY, and had an amazing time. That was also when we had our pictures done. Rob Spring did such a fantastic job. He was like a ninja photographer, he was so awesome. He seemed to be everywhere, gave us some great direction and just seemed like he was the calmest person at the event.