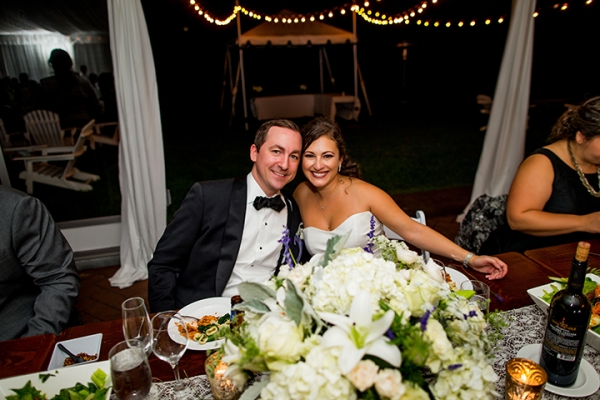 Our Story
Nick and I went on our first date on October 4th, 2011 in New York City, but we quickly realized we had been leading parallel lives for years prior. We hung out at all the same places and can both recall being in the same place for a specific event or happening - multiple times. However, it took us meeting online to actually go out on a date. We hit it off right away and neither of us went back online after our first date.
Nick works in IT and I produce TV commercials. We both have hectic schedules at times, but always managed to make time for each other.
Being a Skidmore alum. I had a long-standing tradition of
spending New Year’s Eve in Saratoga with my close friends from college. We would come in from whichever cities we were living in at the time to congregate at our favorite watering hole, Desperate Annie’s, and ring in the New Year together. Nick had only been to Saratoga to see concerts at SPAC but wanting to spend our first NYE together he came along to join in the tradition.
That was the first time we said I love you. That next
September we moved in together.
Our trips to Saratoga for NYE continued, plus we started making more trips for the track in the summer and foliage in the fall. On one such trip, October 1st, 2017 - six years after meeting - Nick planned an extra stop in Lake Placid. He proposed on top of Whiteface Mountain (after we both discovered I am afraid of heights – who knew!). We joke to this day that I only said yes so, he would bring me back down the mountain. Our favorite hockey team, the NY Rangers was in Lake Placid that weekend and were staying at our hotel. We saw it as a good omen as we are both diehard Rangers fans!
I grew up in New York City and Nick grew up in Marcellus NY. To us Saratoga has always felt like a blend of where we both come from, probably why we enjoy spending time there so much. After visiting venues in NYC and the Syracuse/Finger Lakes area we decided to
get married in Saratoga… the place we had shared so many good times in, together. Not only is it about midway between both of our hometowns but also, it is such a special place to us and we wanted to share it with those we care about most.
When we saw the space at Saratoga Polo Association, we knew we had found our venue. It is such a beautiful and unique location and it allowed us to have both indoor and outdoor components to our reception which was important to us. They were fantastic and so accommodating, they made it easy for us to customize our day, to feel personal and not just like another cookie cutter event. All our vendors were spectacular and worked so closely with us to make our day perfect! We could not have been in better hands and we can’t thank them all enough for making our wedding truly special and amazing.
The whole wedding weekend was magical. We felt so lucky to have family and friends come from all over to celebrate with us. People came from New York City, New Jersey, Syracuse, Boston, California, Washington DC and even Italy. We wanted some place that was easy for everyone to get to but also a fun destination. We got married on the Saturday before Columbus Day so our guests could make a mini vacation out of the trip if they wanted to. Having everyone come together in Saratoga for us was so touching and meaningful. We felt so fortunate to have so much love around us as we started our lives together as husband and wife.
Wedding date
October 6, 2018
Location
Saratoga Polo Association
Photographer
Leo Timoshuk
Stationery Suite
Appycouple
Wedding gown
A Love Story Bridal
Bridesmaids' dresses
Chose their own
Tuxedo
JCrew
Event Decorator
Rena & Rain or Shine Tent Co.
Rings
Tiffany & Co.
(for ceremony bride used gold band,
5th generation to wed in it)
Hair & makeup
Lipstick N Lashes
flowers
Rena's Fine Flowers
Wedding planner
Donna Connor @ On the Go
Caterer
B-Rad
Dessert
S'mores Station & Tiramisu by B-Rad
Transportation
Premiere Transportation
Band
Soul Session
First dance
'Into the Mystic ' by Van Morrison
Honeymoon destination
Crete Greece, Venice Italy,
Lake Como Italy
Room Block & After Party
Embassy Suites
Rehearsal dinner & welcome drinks Hatties patio
Photos
Congress Park, Adelphi and Saratoga Polo
Brunch/local brewery tour
Saratoga Winery, Artisinal Brewery,
R.S. Taylor (bus from Premiere)
Special touches...
We set up S'mores tent and fire pits outside the reception tent and everyone got to make their own S'mores. We did a sabrage, a polo tradition,  and a dessert and aperitif table. My Uncle performed the ceremony. We shipped in sugared almonds from Ernesto Brusa in Italy as favors, a tradition of five wishes.
Advice to pass along...
Do what you like but more importantly don't do what you don't want to. It sounds silly but that's what made our day so special to us and all our friends and family. We didn't stress about the little things we just wanted to host a great weekend for everybody. It was magical to be surrounded by so much love in a place that is so special to us. We worked together to make every choice so that it felt like us.
Read 8386 times Last modified on Tuesday, 24 November 2020 18:24
Tweet
Published in Bride

View the embedded image gallery online at:
https://www.saratogabride.com/component/k2/item/5-destination-saratoga-brooke-nick-nightingale#sigProId11780bc7f4
More in this category: « My Daughter’s Wedding  Notes On “The Morning Of… ”  3 Bridal Accessories As Important As The Dress Itself »